The vast majority of women are certain about their decision by the time they present for their abortion information visit and go on to obtain an abortion.
Women seeking an abortion are as certain, if not more certain, about their decision as women and men making other health care decisions.
The 72-hour waiting period and two visit requirements create hardships for women, most of whom have already made the decision to have an abortion by the time they present for care.
Utah’s 72-hour waiting period and two-visit requirement burdened women with financial costs, logistical hassles and extended periods of dwelling on decisions they had already made.
It also led some women to worry that they may not be able to have the type of abortion they preferred and pushed at least one woman beyond her facility’s gestational limit for abortion.
Most women had made the decision to have an abortion and were not conflicted about their decision when they presented for their abortion information visit. Only 8% reported high conflict at the beginning of the information visit.
Most (86%) went on to have an abortion.
Most women did not change their certainty as a result of either having to make an information visit or having to wait 72-hours.
Changes in certainty were largely concentrated in the minority of women who expressed uncertainty about their decision before the beginning of the information visit.
The few who reported becoming more certain attributed becoming more certain to learning more about the procedure, meeting clinic staff, and discovering that the facility was a safe medical environment with professional staff. 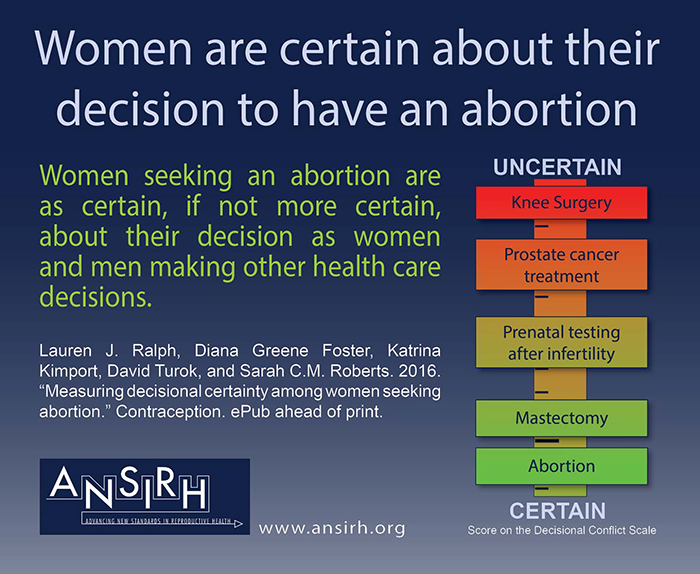 Download the Utah 72-hour waiting period Issue Brief, which highlights some of the findings of this study.

Choosing Abortion for a Serious Fetal Health Issue: From Medical Information to Values