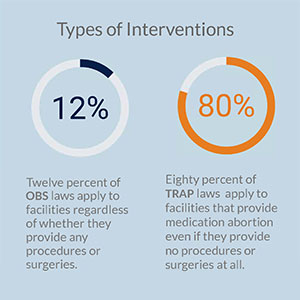 We studied state facility laws across all fifty states and the District of Columbia, comparing (a) laws that targeted abortion provision (TRAP laws or Targeted Regulation of Abortion Providers); (b) laws that governed office-based surgeries, procedures, sedation or anesthesia use (office interventions or OBS) generally (OBS laws); and (c) laws that targeted the provision of specific procedures other than abortion. We found that regulations placed on abortion facilities are more numerous, expansive, and burdensome than laws regulating facilities providing other medical procedures.

The contrasts we identified in the study were especially notable with respect to extent of the law’s application. OBS laws typically apply only to facilities that use a specified level of sedation (e.g., moderate or deep sedation) and that perform surgeries or procedures. Most TRAP laws, on the other hand, apply to facilities that provide abortions even if those facilities provide only medication abortion (by giving the patient pills to take), and use no sedation or perform any surgeries or procedures at all. Thus, while the application of OBS laws is typically tied to the level of risks associated with the services provided, the application of TRAP laws is not.

This study finds that states frequently single out abortion-providing facilities for more extensive and burdensome requirements than other health facilities despite the fact that abortion is very safe (with less than one-quarter of one percent having major complications), as shown in previous ANSIRH research.

The study, titled “State law approaches to facility regulation of abortion and other office interventions,” can be found on the American Journal of Public Health website. Also, be sure to read summaries of these findings in our infographic and issue brief.

The datasets used in this study were created by the Policy Surveillance Program of the Center for Public Health Law Research at Temple University. The datasets, which include abortion facility licensing (AFL) requirements, ambulatory surgical center (ASC) requirements, and Hospitalization requirements (HR) – along with the OBS laws dataset, are available at LawAtlas.org. All datasets can be explored using the site’s mapping tool that navigates through nuanced elements of the law across jurisdictions. The data is also available for download as an excel spreadsheet without cost. Each dataset is accompanied by a codebook, a research protocol, and a report.

Request a pdf of the study.

Texans turned to nearby states for abortions after HB2