In 2011, an Ohio law took effect mandating use of the FDA-approved protocol for medication abortion. The protocol in place at that time, which was approved in 2000, restricted medication abortion to gestations ≤7 weeks LMP, used a higher, more expensive dose of mifepristone, and required an additional visit for misoprostol to be provided in clinic (see Table below). In March 2016, the FDA approved a label change for mifepristone, which brought the protocol in line with the current evidence base for medication abortion. At equivalent gestations, the evidence-based regimens have higher effectiveness rates than the outdated FDA-approved regimen. It is routinely administered throughout the U.S. and the world, and is the regimen recommended by guidelines of the American College of Obstetricians and Gynecologists, the National Abortion Federation, and the World Health Organization.

In 2013, Ohio enacted a law requiring all abortion facilities to have transfer agreements with private hospitals. Unable to obtain such agreements, many facilities have had to close as a result.

More medical treatments: Women in the post-law period had three-times the odds of needing at least one additional medical treatment to complete their abortion as women in the pre-law period—medical treatments increased from 4.9% pre-law to 14.3% post-law.
More follow-up visits: Women were required to come into the clinic four times to complete their abortion post-law compared to three times pre-law.
Significantly more women had to have two or more additional follow-up visits to complete their care—4.2% pre-law vs. 6.2% post-law.
Side effects: Among women having a medication abortion after the law change, 8.4% reported at least one side effect in the pre-law period, compared to 15.6% post-law.
Higher costs: Due to the higher dose of the costly drug mifepristone, average patient charge for medication abortion rose from $426 to $551 between 2010 and 2014, reflecting a 16% increase in price after adjusting for inflation.
Decline in use: The four clinics in the study saw an 80% decline in medication abortions between 2010 and 2014 compared to a 17% decline in all abortions over same time period.
The proportion of all abortions provided in these clinics that were medication abortions declined from 22% in 2010 pre-law to 5% post-law. 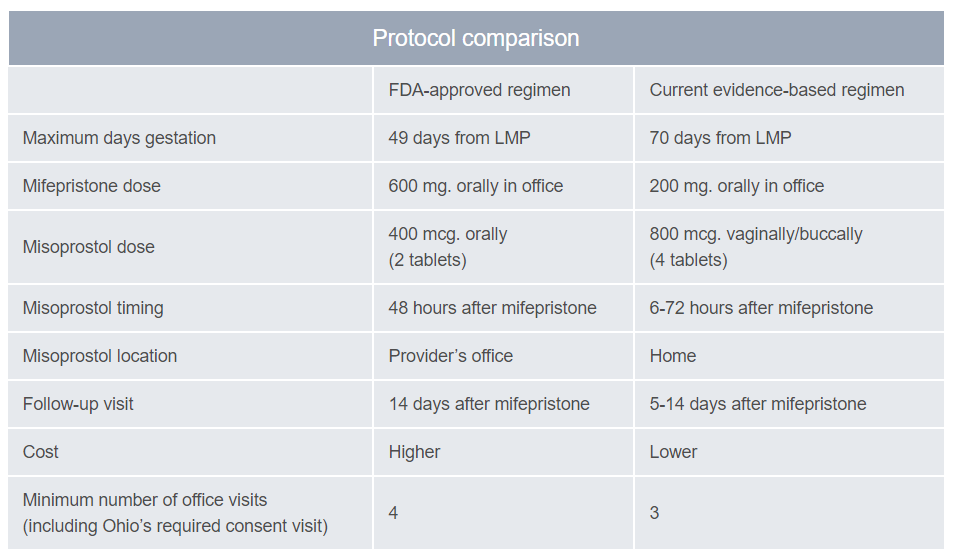 The Ohio Transfer Agreement Study sought to understand the effects of clinic closures on women who attempt to access abortion care at a closed facility. In collaboration with providers currently at risk of closing or that have closed, we recruited women whose appointments were canceled or could not be scheduled due to the clinic closing.  Women were referred to the study by clinic staff, and a phone interview was conducted with participants three weeks following their last contact with the closed clinic. 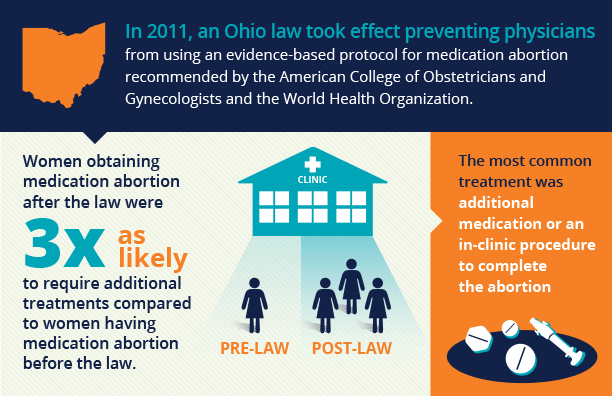 Time from first clinical contact to abortion in Texas and California