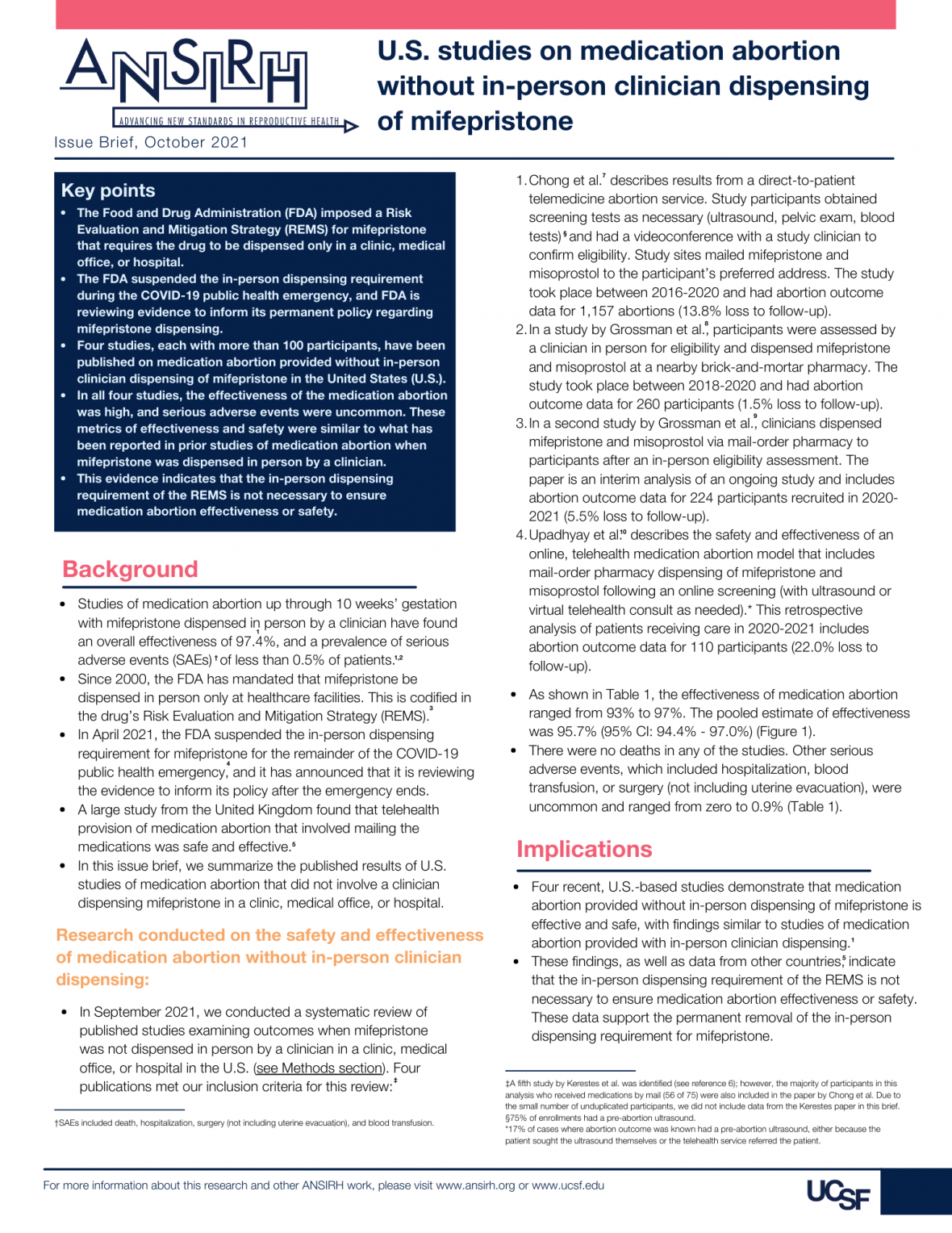 The most effective regimen for medication abortion uses mifepristone, followed by misoprostol. The Food and Drug Administration (FDA) has imposed a Risk Evaluation and Mitigation Strategy (REMS) on mifepristone, which requires it to be dispensed only in a clinic, medical office, or hospital by a certified provider. There is increasing interest in removing the REMS, which creates barriers in accessing medication abortion for patients. The FDA has suspended the in-person dispensing requirement during the COVID-19 public health emergency, and the agency is currently reviewing the REMS program for mifepristone. The FDA is expected to provide a progress report on its review in November 2021.

Download the full issue brief now. To learn more about the methods used in these studies, see below.

We conducted a systematic review of all published, U.S.-based studies that offered mifepristone without in-person dispensing to patients seeking abortion care and included follow-up data on abortion effectiveness and safety. We searched PubMed on September 22, 2021, with the following search terms: mail AND mifepristone, (pharmacy OR pharmacist) AND mifepristone AND abortion, (medication abortion) AND (telehealth OR telemedicine). In total, 37 abstracts were identified, of which 5 publications met inclusion criteria and were included. After initial review, one publication was removed as its study population overlapped significantly with another publication (see ‡ footnote in issue brief).

Two researchers independently reviewed each publication and extracted key study design, measurement, and outcome data. The unit of analysis in all studies was individual abortions, and cases where patients were known to not have taken mifepristone were excluded in our analysis. Loss to follow-up was defined as the number of abortions with no information on abortion outcome, divided by the number of total abortions, not including cases where it was known the participant did not take mifepristone. We extracted overall effectiveness and safety outcome measures from each study but applied our own definitions to the data from each study. Effectiveness was defined as the proportion of abortions that were complete with medications only, regardless of misoprostol dosage. For safety, we extracted information on serious adverse events including death, hospitalization, surgery (not including uterine evacuation), or blood transfusion that were at least possibly related to the medication abortion and that occurred after mifepristone was taken. When this information was not available in published sources, we followed up directly with study authors.

Using Stata’s metaprop command,¹¹ we plotted study-level effectiveness estimates using a forest plot. We then assessed statistical heterogeneity using the I² statistic; an I² > 50% was considered evidence of substantial heterogeneity between studies and a contraindication to pool estimates.¹² Given our I² statistic of 33.25%, we used random effects models to calculate a pooled estimate of effectiveness across the four studies. Since two of four included studies had zero SAEs, we present study-level safety estimates descriptively. All analyses were conducted in Stata 15.1.