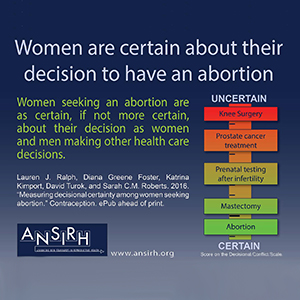 Laws aimed at preventing women from making an unconsidered decision about abortion – including mandatory waiting periods and information scripts, ultrasound review requirements, and parental involvement requirements – are common in the U.S. These laws presuppose that most women are conflicted in their decision about abortion. However, minimal research has examined how certain women are of their decision to have an abortion, especially as compared to other health care decisions.

In "Measuring decisional certainty among women seeking abortion," published in the journal Contraception, we surveyed women seeking abortion care at four facilities in Utah. Before they met with a provider for pre-abortion counseling, women were asked to complete the Decisional Conflict Scale, a validated measure widely used across diverse health disciplines to assess decisional certainty, and the Taft-Baker Scale, a measure developed by abortion providers. Three weeks later, we followed up with women to see if they had had an abortion.

Overall, women had low scores on both scales, indicative of low uncertainty. Further,

women who were more certain (that is, had scored lower on each scale) were more likely to have had an abortion at follow up.

Scores on the Decisional Conflict Scale in this sample were comparable to or lower than scores in other studies of men and women making health care decisions, such as what type of treatment to choose after a breast or prostate cancer diagnosis, whether to undergo reconstructive knee surgery, or whether to undergo prenatal testing in pregnancy after experiencing infertility or use antidepressants in pregnancy.

Together, these findings challenge the assertion that abortion decision making is exceptional compared to other health care decisions and requires additional protection such as laws mandating waiting periods, counseling, and ultrasound viewing.

Emotions and decision rightness over five years following an abortion: An examination of decision difficulty and abortion stigma