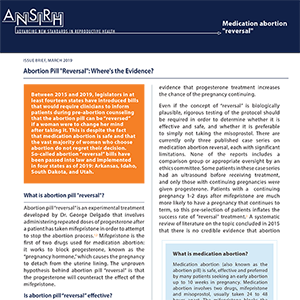 Between 2015 and 2019, legislators in at least 14 states have introduced bills that would require clinicians to inform patients during pre-abortion counseling that the abortion pill can be “reversed” if a woman were to change her mind after taking it. This is despite the fact that medication abortion is safe and that the vast majority of women who choose abortion do not regret their decision. So-called abortion “reversal” bills have been passed into law and implemented in four states as of 2019: Arkansas, Idaho, South Dakota, and Utah.

Abortion pill “reversal” is an experimental treatment that involves administering repeated doses of progesterone after a patient has taken mifepristone, the first of two drugs used for medication abortion. However, there is no evidence that progesterone treatment increases the chance of the pregnancy continuing. Even if the concept of “reversal” is biologically plausible, rigorous testing of the protocol should be required in order to determine whether it is effective and safe, and preferable to simply not taking the second medication abortion drug, misoprostol.

Our latest issue brief reviews the currently available published evidence on medication abortion “reversal” and concludes that additional rigorous evidence is needed before clinicians are required by law to counsel their patients about the experimental treatment.