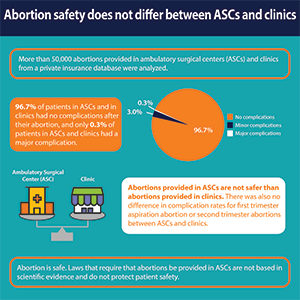 Abortion already is a very safe procedure, and ASC laws do not appear to increase this safety. Laws that require that abortions be performed in ASCs are not based in scientific evidence.

Learn more about the study, “Association of facility type with procedural-related morbidities and adverse events among patients undergoing induced abortions,” at the JAMA website.